Here is our Native Path Krill Oil review. If you’re someone who cares about your health, you are probably aware that Omega-3 essential fatty acid is something that we all need. It’s essential because our bodies can’t produce it. It helps fight inflammation and support your cardiovascular system.

What you might not know is that all Omega-3 is not created equal. The key is to get Omega-3 that is bioavailable, so your body can use it. Native Path Krill Oil claims to be the answer – but is it?

In this review, we’ll explain what Native Path Krill Oil is, what it can do for you, and whether there is scientific research to support the claims made about it. 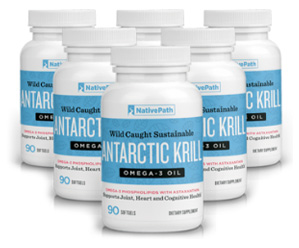 What is Native Path Krill Oil?

Native Path Krill Oil is a nutritional supplement created by Native Path. The main ingredient is krill oil, which is oil harvested from krill. Krill are tiny organisms that float on the ocean’s surface. They serve as a food source for many fish and sea mammals, including whales.

Since the human body cannot produce Omega-3 on its own, it is necessary to get it in one of two ways:

The key, as we’ll discuss later, is getting a form of Omega-3 that your body can use.

Native Path is a company that is dedicated to finding natural ways to promote human health and well-being. The company was co-founded by four people:

The krill oil is contained in a gelatin capsule, which means that this product is not vegan. Each bottle contains 90 capsules.

Native Path Krill Oil is naturally sourced from Antarctic krill. Krill are tiny crustaceans that live in floating masses known as swarms. There may be as many as 40,000 krill per cubic meter in a swarm.

Krill feed primarily on phytoplankton. They are considered the most abundant animal species on Earth. Estimates are that there are approximately 500 million tonnes of krill on earth at any time, composed of between 300 and 400 trillion individual animals.

Now, let’s look at some of the scientific evidence about krill oil. Sometimes, there isn’t much research to back up the claims that supplement manufacturers make. That’s not the case with Native Path Krill Oil.

One of the primary claims made about krill oil is that it can decrease joint pain caused by inflammation. That’s why many people who suffer from arthritis take it.

A study from the American College of Nutrition backs up that claim. It found that taking krill oil decreased joint pain in the study’s subjects by 28% in just seven days. Specifically, the krill oil reduced levels of C-reactive protein. It also decreased stiffness and functional impairment.

Another key claim about Native Path Krill Oil is that it can help reduce LDL and overall cholesterol. You probably know that LDL is the so-called “bad” cholesterol that’s dangerous to your heart. A study in France found that taking krill oil reduced LDL cholesterol in their subjects by 36%. The same study also noticed a decrease in triglycerides and blood glucose, which implies that taking krill oil might be beneficial for people with diabetes or pre-diabetes.

Omega-3 has protective qualities that can shield the brain from damage, including the damage caused by dementia and Alzheimer’s disease. A Tufts University study looked at the effects of krill oil supplementation and found that it could help lower the risk of dementia in study subjects by an average of 47%. Likewise, it found a 39% lower chance of developing Alzheimer’s disease.

The key argument in favor of krill oil (as opposed to Omega-3 derived from fish) is that it is more bioavailable, meaning that your body is better able to use it. One study found that krill oil stayed in the body up to 72 hours longer than fish oil. Another study found that krill oil contains higher levels of EPA and DHA (both of which are in Native Path Krill Oil) and might thus be preferable to fish oil as a supplement.

It’s also worth noting that there’s a lower risk of finding pollutants and contamination in krill oil. The American Heart Association has noted that there is a risk of mercury contamination in certain fish. There is no such risk with krill because of where they are sourced.

The takeaway here is that there is ample scientific evidence to support the claims made by Native Path about its krill oil. This product is naturally sourced and safe to take. It is reasonable to expect that making Native Path Krill Oil part of your daily regimen can help reduce joint pain and inflammation, lower your cholesterol, and protect your brain.

Every supplement has upsides and downsides. Let’s look at the pros and cons of Native Path Krill Oil, starting with the pros:

There are a few downsides to consider as well. For example:

For people who aren’t vegan and don’t mind buying supplements online, we think the pros far outweigh the cons. This is a product whose health claims are supported by research.

How Much Does Native Path Krill Oil Cost?

By now, you are probably wondering how much Native Path Krill Oil costs. We mentioned before that it’s a bit more expensive than other Omega-3 supplements, but what does that mean? Here’s how it breaks down.

The price per bottle is reduced when you buy in bulk. You may buy Native Path Krill Oil one bottle at a time, or in bundles of three or six bottles. The prices are: 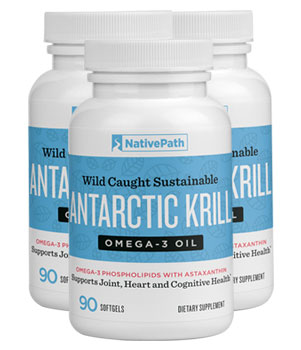 The way it breaks down is that you’ll pay almost 16% less per bottle if you buy three at a time, and more than 30% less if you buy six at a time.

Our final recommendation is that Native Path Krill Oil is a good product that’s worth trying. Native Path products have a good reputation, and the scientific evidence backing up the health benefits of krill oil is substantial. The money-back guarantee means that you can try the product at no risk.

If you’d like to order your own supply of Native Path Krill Oil today, please click here now.

Fish Oil vs. Krill Oil – The Dual of The Omega-3 Fatty Acids